Jami Macarty teaches contemporary poetry and creative writing at Simon Fraser University. She is the author of Landscape of The Wait (Finishing Line Press, 2017), a chapbook of poems written out of her nephew William’s car accident and year-long coma. A former Executive Director of Tucson Poetry Festival (1996-2005), she currently serves as a poetry ambassador for Vancouver’s Poet Laureate, Rachel Rose. She is co-founder and editor of the online poetry journal The Maynard, and writes Peerings & Hearings–Occasional Musings on Arts in the City of Glass, a blog series for ANMLY (FKA Drunken Boat). She is also a dedicated practitioner of yoga and meditation, a fact that quickly surfaced during our conversation about her Vallum Chapbook Award-winning manuscript, Mind of Spring.

During the month of June, Jami Macarty and I corresponded over email to discuss meditation, bliss, interconnectivity, the palo verde (desert tree species), and the difficulty of articulating anything about the creative process with absolute certainty, among other topics. By fusing her poetic practice with her yogic practice, she is able to write in a voice that welcomes everything “just as it is.” The resulting poem is contemplative and intuitive, as well as vivid and visually stunning. Our correspondence has been edited for brevity.

VALLUM: Mind of Spring has a very distinctive voice, in how it chooses to present imagery, relay emotion, and move the reader through space. How did you arrive at this voice, for this chapbook?

MACARTY: At the risk of seeming to parse words, I’m not sure “I” arrived at this voice. I’d put it this way: this voice came to the foreground to claim its say. The poem uses meditative contemplation as a compositional mode, and from that mode comes the voice of a season of the mind. The mind speaks in the poem. The voice of this mind emanates from the deep self, the “guru” voice of the higher self. Qualities of the voice that interest me: it’s surprisingly shame-free; it has rare candor and intense tenderness for self, other, and environment. Its aim seems simply to welcome what arises—nest-building, DVD-returning—everything just as it is, in its field of attention, moment-to-moment.

VALLUM: I’m especially interested in the speaker’s ability to “welcome what arises” and treating activities like DVD-returning the exact same way it would treat something more conventionally beautiful, like smelling a flower or seeing a tree. When writing this way do you, as the poet, enter that state of mind? Living moment-to-moment?

The field of the poem intends to be an open space, a neutral space, welcoming everything.

MACARTY: Rather than it being an “ability” to “enter that state of mind”—to welcome what arises, moment-to-moment—it is an intention. The field of the poem intends to be an open space, a neutral space, welcoming everything. The poem tracks and enacts the expression of that intention through its compositional mode, which is contemplative, meditative. It can be weird to make these distinctions this way. You see, I’m answering these questions after the fact. I have to admit, or risk pretension, I don’t know exactly why choices were made, for what I was going. I am, at this time, not that one anymore.

VALLUM: Do you see a relation between a contemplative/meditative compositional mode and the season of spring? For example, would winter inspire a different mode?

MACARTY: What a charming question! The palo verde tree blooms in the desert’s spring. Across the city of Tucson, the blossoms are masses of yellow, joyful to behold. The palo verde bloom is long-lasting and expansive. Perhaps that’s part of why this led to the compositional mode. Then again, I’m an all-season meditator, so meditation is a constant in my life. Winter might indeed inspire a different mode, but I wouldn’t know what that was until the words began their process. I wish we could pose this question to Wallace Stevens, one of my deep loves. His poem “The Snowman” opens with:

One must have a mind of winter
To regard the frost and the boughs
Of the pine-trees crusted with snow;

I could say the blooming palo verde trees gave me a mind of spring and are a Mind of Spring.

VALLUM: Which other poets do you admire?

MACARTY: This is a question, the answer of which, to me, is enormous. How do I answer it? I admire many, many poets. I want to include everyone! How about this—that I answer the question from the field of this poem? Those poets joining Wallace Stevens, and who provide some shoulders on which Mind of Spring stands, are William Carlos Williams, Gertrude Stein, and Clarice Lispector; O, and these beautiful writers: Jesse Ball, Danielle Vogel, Hiroshi Ito, Rebecca Solnit, Cecelia Vicuna, Bhanu Kapil, Pierre Cixous, plus bits and pieces of writings on narrative and rhetorical devices, and the maps of geographer Denis Wood.

VALLUM: I’d like to talk a bit more about the writing process. Do you listen to music while you write?

MACARTY: For about a month leading up to the actual manifested ink on paper of Mind of Spring, I was listening to the music of those writers just mentioned, plus Bach, and the This American Life series Ira Glass did on Denis Wood’s mapping. My consciousness had been holding onto this abundance of words and sounds and images until Saturday and Sunday, April 21st and 22nd, 2012, the two days during which Mind of Spring was made. That weekend, I was on my own, and relishing listening to the silence and whatever else entered the field of (my) hearing. For instance, the voice of this sign [below], which called to me from the soft shoulder—speaking of which—of the avenue being walked in Mind of Spring. The consciousness of the poem listens to the verbal signatures of people and things entering its field. Everything, every sound, sight, taste, scent, touch, was oracular. 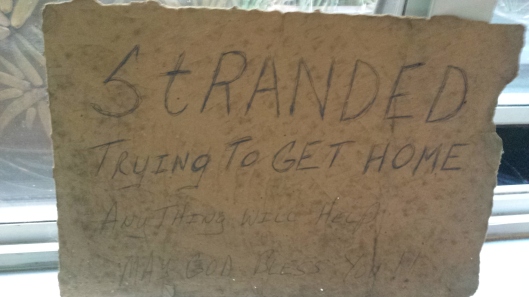 VALLUM: I am curious about how certain words are drawn out, like
“y y e l l o w s”—would that be a poetic manifestation of these “verbal signatures”?

MACARTY: I was wondering how we’d get here, to the echoing vowels and consonants in Mind of Spring, which are still somewhat mysterious to me. Yes, I can go with your question and agree that to some extent those “drawn out” words, as you refer to them, are a poetic manifestation of “verbal signatures.” That arrival—at “verbal signatures”—is a surprise to me. I want to try to say what else, more specifically, the echoes, repeats, seem to want to do. One thing is emphasis, the way a stutter or echo can add emphasis. They attempt also in some places to create a fullness, an abundance. In all cases, I’d venture they attempt an enacting, an enactment. For example:

I’d love to stay with this a bit, and with your help, see if I can get even closer to this still mysterious (at least to me) aspect of the poem​. So, to gently and respectfully turn the table, would you say more about their effect on you?

VALLUM: Absolutely. I wanted to ask about them because they are so unusual, but also so intuitive. As I read them I’m not confused, they seem natural, which is, in a way, confusing! Why do they fit in the field of this poem? I think for me, this long poem doesn’t occupy a lot of space on the page, visually, so every word that makes it into the poem has more significance. So, when a word “lasts longer” in the speaker’s experience, it’s drawn out. For example: “no cars left t     no cars right t”: I interpret the added “t” as being the viewer looking a little further left, then right, into their periphery. It’s a long look. But, as you mention with enactment, in something like “t take path” the initial “t” is indicative of a hesitation. Then there’s the more internal register, like “home m m”: that’s almost like mediation, the OM, using sound to create a sensation. So, for me as a reader, they’re a way of creating different sorts of emphasis, kind of like articulation marks on sheet music.

MACARTY: Wow! My heart has goosebumps! And now it’s running through the streets singing yes yes yes, another human soul, reader has entered and is in the field of Mind of Spring, is in the poem’s sound field, is a sound in the poem’s field. What you say especially about “home m m,” as the OM (traditionally the three syllable AUM), points me to the ways my Bhakti (devotional yogic chanting practice) infuses the field of the poem and is a Presence in the field. I hadn’t fully realized that in a way I could articulate. You, through the field of the poem, pointed me toward Awareness! That makes me happy; bliss—Ananda!—arises. This discovery, this connection—yours and mine—reveals unequivocally the Presence (of Goddess) as a constancy in my life. Are you with me?

VALLUM: I’m with you! I’m feeling the bliss here in my office chair, across the country. I don’t recognize some of the yogic vocabulary you’re using, nor am I familiar with the practice, though I believe I’m inferring their meanings correctly. Do you think that poetry is a way to create meaningful connections between people; by catalyzing bliss, awareness, or other sensations?

…it is a gesture of self-trust and trust of other, and allows for the communication to be elevated and also deeper between us, which is another way of saying that we are communicating via the intuitive, present moment.

MACARTY: Yes, that’s what we’re talking about, while also feeling it: language can transmit feeling, connecting us, two strangers on opposite sides of the country. There is simultaneity and togetherness even while there is also linearity and separateness. And also the process of inference, as in your “inferring their meanings,” feels so sacred, feels such a necessity, because it is a gesture of self-trust and trust of other, and allows for the communication to be elevated and also deeper between us, which is another way of saying that we are communicating via the intuitive, present moment. This is the language and possibility of poetry. Also, I realize those extended notes act like Bija mantras, the one-syllable seed sounds that when uttered activate the energy of the chakras to purify, balance, and transform. The intention of the one-syllable notes in Mind of Spring seems to be to enact energy in the seasonal landscape, and to activate energy within the reader. Wow, this conversation has brought to the fore much about my practice of yoga and meditation…

VALLUM: Let’s talk about that a bit. How does your poetry practice relate to your yoga/meditation practice? Do you feel yourself entering a similar state of awareness when writing and when meditating, or are they disparate?

VALLUM: I think that meditative state of being definitely comes through in the chapbook. If you could leave your reader with one feeling to take away from Mind of Spring, what would it be?

MACARTY: A one feeling take-away? That’s foreign to my way of thinking. One response that comes to mind is to contextualize the poem in hopes this may be of use to the reader. There’s also the presence of the thought “that response may be something to work against.” And, there’s the rub of dualities. The very “thing”—a warring of opposites—Mind of Spring, in its three parts, contemplates. Social, cultural, environmental, and personal mechanisms of war and the grief they accrete abide with (and within a poem of) uplift in the welcoming field. Everything just as it is—a radical contemplation of union between and among disparates.

Mind of Spring won the 2017 Vallum Chapbook Award. You can pre-order the chapbook through our online store.