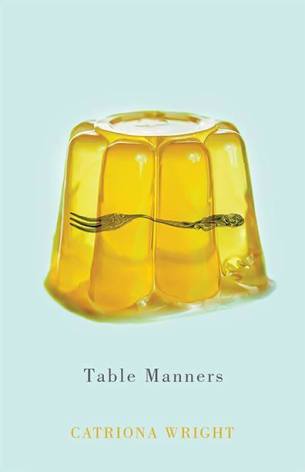 Molecular Gastronomy is a concentration of food preparation focused on the creative physical and chemical transformation of ingredients at a microscopic level. This concept is alluded to in “Gastronaut,” the title of the first poem in Catriona Wright’s debut poetry book Table Manners. The poem reinvents the term, instead suggesting the opposite, a scientific exploration of consumption as it relates to the external. A photo of “barbecued tarantulas in Cambodia” causes the speaker “jealousy and rage” for which they must confront by way of their “edible moss” that is only adequate insofar as it might “calm myself enough to sleep.” Here the language of rare and high cuisine stands as a place marker for other suggestions of class—travel, freedom, rare and often inaccessible experiences that may lead to expensive varieties of wisdom. The speaker in the poem is aware of their own shortcomings but (literally) breathes back into those it perceives as judgmental, “My breath smelled as though I’d been fellating a corpse. I coughed on everyone.”

This sets up the central concern of Table Manners: how the self reacts when constrained by the obligatory digestion of cultural signifiers and the sometimes unpalatable imperative to perform socially. The poems do not provide an answer but interrogate social experience purely through reaction and reflection, compacted by the constraint of culinary terms that often reveal themselves as distinctively unappetizing. In “Dumpster” the voice flirts with eating garbage:

I would not let a single

unless it had first passed through the purifying

capable of transforming the too, too processed

into the unsullied flesh.

The contents of the dumpster are allotted the same linguistic treatment as fresh produce at a grocery store and explored with the same capitalistic impulse, “The only thing rotten is everything sold here.” While Wright’s andoxographic practice should have the impact of mocking the dumpster, it instead, cleverly, has the opposite effect. It elevates waste while diminishing the appeal of clean and fresh material thereby embarrassing the lexical signals society uses to sell and profit off ideals and anxieties surrounding health and nutrition. In the poetry of Wright, everything is both soiled and appetizing.

This is again reiterated in “Parties: A Selection”—a collection of haikus that concisely portray different social gatherings:

pumping up the crowd

this first poem in the series conveys what one might imagine to be a lavish nightclub with techno music and bottle service.  Yet, by the end of the series we are at another event entirely:

please don’t call me a lady

Here food has the power to signal not just what people will be eating but what they will wear when they eat, where they will eat it, and, ultimately, it sets the tone for the kind of social engagement the speaker will have.

It might be a stretch to call Wright’s poetry anti-Whitman because it seems both poets are driven by the urge to connect the body with the external world to show the ways in which the external and internal of undivided. However, while Whitman celebrates the body as intermediary between external and internal, Wright problematizes this connection. In Table Manners the body is one with the world but the world makes the body sick. These are not celebratory poems, they are irritable bowel poems wherein the body is capable, adherent to natural law, but reluctantly adherent and always in pain. This is at its most elevated point in the collection in the poem “Origin Story” where mandatory ingestion predicates an obligatory renunciation of the self: “women resigned themselves, just waited for it to end, floating above their bodies.” The point is reinforced in “Instinct” where bodies fight the desire to eat other bodies (“just a few clean snips to guarantee I won’t be tempted to devour my young”). Both these poems are devastating and masterful, they are the two best of the collection.

One criticism for Table Manners is that what works for it, sometimes works against it. While the constraint is noble—the language of the culinarian in the world beyond the kitchen—limiting a project to reliance on a single metaphor that repeats itself can sometimes feel to the reader as if they are being hit over the head with the theme. The book, paradoxically, is at its best in the poems that abandon the metaphor the most.

Julie Mannell is an author of poetry, prose, and essays. She is currently completing her MFA in Creative Writing at the University of Guelph. Mannell is the recipient of the Constance Rooke/HarperCollins Scholarship, the Mona Adilman Poetry Prize, and the Lionel Shapiro Award for Creative Writing. She splits her time between Montreal and Toronto.

This review was published in issue 14:2 “Lies and Duplicity.” To see more from this issue, please visit Vallum’s website.

Download the FREE APP and FREE SAMPLE EDITION for your tablet, kindle or smartphone through PocketMags OR iTunes