Chapbook Contest, interview, It Was Treaty / It Was Me, Matthew James Weigel

Matthew James Weigel (he/him) is a Dene and Métis poet and artist pursuing an MA in English at the University of Alberta. His words and art have been published by people like Book*Hug and The Mamawi Project, while his first self-published chapbook “…whether they took treaty or not, they were subject to the laws of the Dominion” is held in Bruce Peel Special Collections. 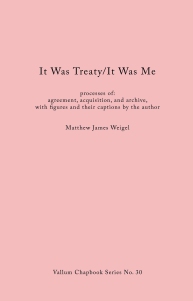 It Was Treaty / It Was Me feels almost like a collage. Drawing on government records, archival images and his own family history, Matthew James Weigel blends prose and poetry to look how John A. Macdonald and his government used treaties to dispossess Indigenous peoples of their lands. Weigel juxtaposes the machinations of the Canadian government with other versions of the story; official history bumps up against memories recorded in the body, exposing corruption and violence. “I wake up at 6am to a weight on my chest. / I massage it until it says the word treaty,” Weigel writes. This body memory is inextricable from land and water. “Did you know that when you wrote this down the river would remember it?” In recounting these histories, Weigel re-situates them. Under a picture of Queen Victoria’s throne, he writes: “I have acquired and used this photograph without permission. It has been digitally altered to suit my needs.” Another photo, though, remains beyond his grasp – an image of his family, held at the archives of the University of Alberta. These are not just questions of what happened, but who gets to tell the story of a past that bleeds into present. Sometimes, the most important act is to bear witness. “Dreamt I was a river again,” Weigel writes in the final poem, “2020: witness (continued).” “A thread of a glacier unwinding itself in slow motion, / slow enough to dip hands in and drink.”

Leigh Kotsilides: Can you talk a bit about the research process for these poems? Did you start your research with the intention of writing this chapbook?

Matthew James Weigel: For me, this chapbook is an example of what is called research-creation. So, I would say that the research process and the writing process are parts of the same whole. The research is of a very personal nature, and to a certain extent, poetry is the only way to work through and understand the research. The process takes many different forms depending on what kind of poem I’m building, but they always follow the same basic pattern. I’ll spend many, many hours looking at archival material, reading stories or sharing stories with others, staring at photos, maps, tables, parliamentary session reports, old advertisements, anything—and then I’ll work through what I learn by building poems. Sometimes poems come together quicker than others, and sometimes they require substantial revision or significant changes to form. But for the most part my work ends up something like 90% rolling up my sleeves in the archive, and the last 10% thinking and writing and re-writing what it is I’ve learned.

LK: There’s a long tradition of historical records as source material for poetry. Were there any particular poets you were inspired by while working on this project? Or, did you have a particular vision for how you wanted to use these records in your poetry?

MJW: I don’t think the vision is very clear very often. In my visual art and artist’s book practice, a lot of the objects I’ve created started out as images in my head, and then it becomes a technical
challenge to bring them to life. With varying levels of success! And some of my visual poetry is like that, where I know what it will look like before I begin crafting it. With less-visually- focused poetry it is more often a process of substantial revision and re-writing and sitting with the records and stories and knowledge. It’s more like I have to turn the pieces around and around and find the places where they fit together. Sometimes my visual poems start out as verse I’m not happy with, and sometimes what ends up as verse started out as a visual poem I wasn’t happy with. It becomes a process of trying to figure out what the vision is for a while. That “10%” of the writing process can come in a lot of different forms.
Before I turned seriously to poetry, my undergraduate degree was in Biological Sciences, where I worked in a lab and did a lot of research. That kind of research is more of a conversation with the people you’re working with. So, as a poet I definitely know a lot less about that tradition of using historical records than I maybe should. I’m a bad student of poetry! But there are a lot of contemporary Indigenous poets that inspire me and I think my work fits in conversation with those writers in ways that it could never speak with ‘traditional’, ‘academic’, or ‘institutional’ poets.
Someone who comes to mind in that way is Joshua Whitehead. I don’t think I’m ever more inspired to write than when I read Full Metal Indigiqueer. The way he biomorphs the western canon and tells stories is just so wonderful to me. I’m a huge fan. Marilyn Dumont is definitely another person whose work inspired me in this project. Her poetry engages with history and archive and story and lived experience. Every time I return to her work I come to new realizations and understandings, and I see how those pieces fit together in ways I didn’t understand before. She’s amazing, I love her. And finally I would say Jordan Abel is someone who constantly inspires me. His work talks about land and materiality in ways I find so remarkable, and his writing really makes you think about what you’re reading and how you’re reading it. I’ve been fortunate to work with him and his support has been tremendous. He’s brilliant, I love him.

LK: The collection travels through time, looking at treaty signings from the late 1800s and early 1900s. The narrator seems to move between past and present. How do you conceptualize time and memory in this collection?

MJW: Well, I am the narrator! I think it’s important to mention that. I would say that time and memory are not linear or straight forward concepts. The title of the collection is “It Was Treaty/It Was Me”, I want people to come away being confronted with the fact that people and the land are part of the same whole, and that treaties are about the relationships between each other and the land. I am literally composed of the air and water and plants and animals around me, and my ancestors are a part of that, a part of me. So when I put myself in the shoes of my ancestors, I’m living those connections and relationships. Telling those stories is a way to process, and honor that. But of course, that work is ongoing, I’ll be doing this work for a long time, I hope.
Lastly, I would say that the federal government is very clear that they consider these treaties to be “historical” land agreements. That’s wrong. These are living agreements with very real contemporary consequences. The treaty-making process was very violent and resulted in a lot of displacement and dispossession. Colonial violence and genocide is ongoing.

It Was Treaty / It Was Me is available now, through the Vallum website.