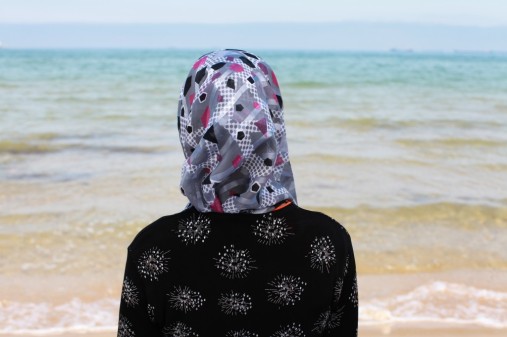 “In Istanbul, a city surrounded by water, I met people who had never seen the sea. I filmed their first time.”

On now through May 10 is Sophie Calle’s debut exhibition at the Musée d’art contemporain de Montréal about sight and a lack there of. The MAC writes that “the exhibition consists of two recent projects by Calle: The Last Image, 2010, a series of photographs accompanied by texts, and Voir la mer, 2011, a series of digital films. These two series take an incisive, poetic look at the particular reality of the mental images of blind people and at the discovery of beauty and the sublime.” On The Last Image Calle explains, “I went to Istanbul. I spoke to blind people, most of whom had lost their sight suddenly. I asked them to describe the last thing they saw.” For Voir la mer Calle went to Istanbul, a city surrounded by water and met people who had never seen the sea. Calle filmed their first time.

The viewer first walks into The Last Image, an open brightly lit room with triptychs and quadratics hung at eye level around four white walls. Each grouping has a portrait of a person, their story typed up and photographic visual accompaniments to add to their story of the last thing they saw before they suddenly went blind. The subject matter is not always comfortable to behold but is captured in a way that is very bright, hopeful with an almost heavenly glow. The colours in the photographs are vivid, warm and summery. The gallery space is well lit and there is a lot of room to breathe and move around. It gives the viewer room to contemplate what the subject in the portrait has gone through. The viewer is reminded not take their own vision for granted. The tales are very personal and poetically written (in French only.)  Set in Istanbul, the viewer sees through their eyes images of people who live their lives on the other side of the world, they are foreign the backgrounds in another country. We see because they do not see.

The second half of the exhibition is Voir la mer (See the Sea). Video is framed like a photograph on large screens suspended from the ceiling and dispersed throughout the room. Each screen is a wide portrait first showing the back of a man or a woman looking out to the turquoise water. They are dressed in well worn clothes, hijabs with bright colours and patterns, matching blouses, flannel and denim of Turkey’s working class. The exhibition space is outfitted with loud surround sound speakers playing the sound of the sea, the walls are painted navy blue and the hardwood floor is coincidentally a sand yellow making it easy for the viewer to allow themselves to fall in next to the seashore, in the place of the subject and feel as though they are on the sea edge, rocking with the waves, taking in the seemingly infinite vastness of the sea. After a long moment the subject turns around and looks directly into the camera. They are conscious that they are staring into the camera, which gives them a sudden awkwardness. Then they relax and forget they are looking into a camera and clearly the viewer can see their contemplation in their eyes, on their faces, a deep meditation on the sea that is behind them. All have a deep emotional reaction, however subtly they may show it they are all elated and touched forever. Thanks to the genius of Calle the viewer is there to share in that touching moment with them.

Born in 1953 in Paris, Sophie Calle is a writer, conceptual artist, photographer, filmmaker, even detective-or a little bit of each, according to the characters she assumes, the rituals she devises, the parts of her life she tells and the feelings she shares. The MAC writes that Calle is one of the most important artists of her generation. Calle’s work is distinguished by its use of arbitrary sets of constraints, and evokes the French literary movement of the 1960s known as Oulipo. Her work frequently depicts human vulnerability, and examines identity and intimacy. She is recognized for her detective-like ability to follow strangers and investigate their private lives. Her work may be found in the collections of the Centre Pompidou, Paris; Guggenheim Museum, New York; Tate Gallery, London; Los Angeles County Museum of Art, L.A.; and Metropolitan Museum of Art, New York. 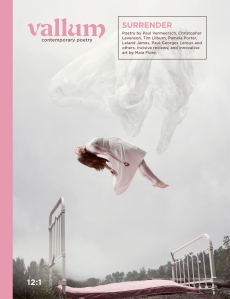 In the spirit of Spring Vallum has created a fresh and new Facebook page for you to follow us on! We will be slowly phasing out our personal profile page so please spring into action and make the fresh start with us. Things to look out for on our new page are Vallum’s Poem of the Week for you to enjoy, as well as contest updates, calls for submissions, and other general relevant poetry news.