Chapbook Contest, interview, It Was Treaty / It Was Me, Matthew James Weigel

Matthew James Weigel (he/him) is a Dene and Métis poet and artist pursuing an MA in English at the University of Alberta. His words and art have been published by people like Book*Hug and The Mamawi Project, while his first self-published chapbook “…whether they took treaty or not, they were subject to the laws of the Dominion” is held in Bruce Peel Special Collections.

It Was Treaty / It Was Me feels almost like a collage. Drawing on government records, archival images and his own family history, Matthew James Weigel blends prose and poetry to look how John A. Macdonald and his government used treaties to dispossess Indigenous peoples of their lands. Weigel juxtaposes the machinations of the Canadian government with other versions of the story; official history bumps up against memories recorded in the body, exposing corruption and violence. “I wake up at 6am to a weight on my chest. / I massage it until it says the word treaty,” Weigel writes. This body memory is inextricable from land and water. “Did you know that when you wrote this down the river would remember it?” In recounting these histories, Weigel re-situates them. Under a picture of Queen Victoria’s throne, he writes: “I have acquired and used this photograph without permission. It has been digitally altered to suit my needs.” Another photo, though, remains beyond his grasp – an image of his family, held at the archives of the University of Alberta. These are not just questions of what happened, but who gets to tell the story of a past that bleeds into present. Sometimes, the most important act is to bear witness. “Dreamt I was a river again,” Weigel writes in the final poem, “2020: witness (continued).” “A thread of a glacier unwinding itself in slow motion, / slow enough to dip hands in and drink.”
END_OF_DOCUMENT_TOKEN_TO_BE_REPLACED

Joe Neubert was born in Georgia and is currently living in Washington, DC.

In DC Poems, the sublime is all around. Joe Neubert’s new chapbook is a collection of snapshots from everyday life, where the poet is the observer, watching and wondering from a distance. With sparse language and precise images, Neubert records the seconds of the day before they’re gone: “early March the sun / the streetlights the people / the afternoon men / playing checkers on a trashcan.” Time and space are reconfigured – we are in D.C., but also Siberia, and also rural Spain, and also the southern pole. Neubert charts these moments in a circular relation to each other. “Does the view from the roof on a monday in march / stir the cells of their unknowable individual / private universes,” he asks.
END_OF_DOCUMENT_TOKEN_TO_BE_REPLACED

This poem won 2nd place in the 2017 Vallum Award for Poetry contest, judged by Nicole Brossard.

Brian Henderson is a GG finalist and the author of 11 books of poetry including The Alphamiricon, a deck of visual poem cards now online at Ubu: http://www.ubu.com/vp/Henderson.html. His latest is [OR] from Talonbooks. Unidentified Poetic Object is forthcoming from Brick in 2019. He is a co-editor of the Laurier Poetry Series, https://www.wlupress.wlu.ca/Series/L/Laurier-Poetry, and lives with his wife, Charlene Winger, in Grey Highlands Ontario.

To view other poems published in this issue please visit Vallum’s website.

Download the FREE APP and FREE SAMPLE EDITION for your tablet, kindle or smartphone through PocketMags OR iTunes.

Waking in the Preceding

Hello my forever ago, don’t worry,
you won’t be reading this much longer.

You will have already returned
in the body of a snowcloud

which is suggestively, fashionably,
only ever one second old.

Yes darling, it’s me, it says as proof
that in space, though there are many

silences, fleeting isn’t the opposite
of infinite, but its perfect match.

Stanching the muscle to work it.
A memory among many I hold

is you and another death-being
drinking cold windowsill

glasses of water, causing shivers
up and down the once two-thing

gendery animalia. Let’s light
the end of a candle

with another longer candle
while we drift in the old ways

your gathering body framed
by the door I ogle daily

as part of my reality of starving
on flowers and realism.

Though not wishing to answer
anything that thrusts too readily

toward any subject, I was once
helped to choose to never again use

I in which
I is not my first person.

Everything permutes
faster than you can imagine.

But in this kind of blindness
we will no longer surveil

we will no longer widely steer
toward avoidance, we will become

like the back-of-office sunbeams
that set the cover to glow.

Contained,
not constrained, by the past.

Childhood I might enter
if I could confiscate the adult sadness.

Adulthood I might enter
if I could confiscate the childhood sadness.

over the answer to the physical reconcilement
of its own questioning. Are we the physics

of our dreams? The ones that keep using
sadness for erotics. That isn’t said quite right

but I think you understand.
In the movement anyhow.

This poem won 1st place in the Vallum Award for Poetry contest, judged by Nicole Brossard.

Ali Blythe is editor-in-chief of the Claremont Review, an international literary magazine for youth. His first book of poems, Twoism (2015, icehouse poetry), was a finalist for the BC Book Awards. In 2016, Blythe received an honour of distinction from the Writers Trust of Canada for emerging LGBTQ writers. Blythe’s poems are published in literary journals and anthologies throughout Canada, and in Germany and England. He lives in Vancouver, BC.

To view other poems published in this issue please visit Vallum’s website.

Download the FREE APP and FREE SAMPLE EDITION for your tablet, kindle or smartphone through PocketMags OR iTunes.

We hope the warm weather has inspired some winning poems!

ONLY ONE DAY LEFT!

THE HEAT IS ON! DEADLINE TOMORROW! 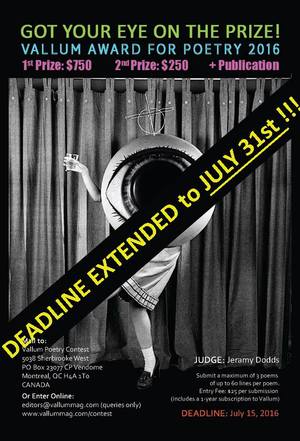 How many days are left to enter?
https://www.youtube.com/watch?v=WibQR0tQ0P8

Who doesn’t love an extension?

THE VALLUM AWARD FOR POETRY 2016

ONLY ONE DAY LEFT!

It really is… the final countdown!
https://www.youtube.com/watch?v=9jK-NcRmVcw

You can doooo it!
https://www.youtube.com/watch?v=VZ2HcRl4wSk